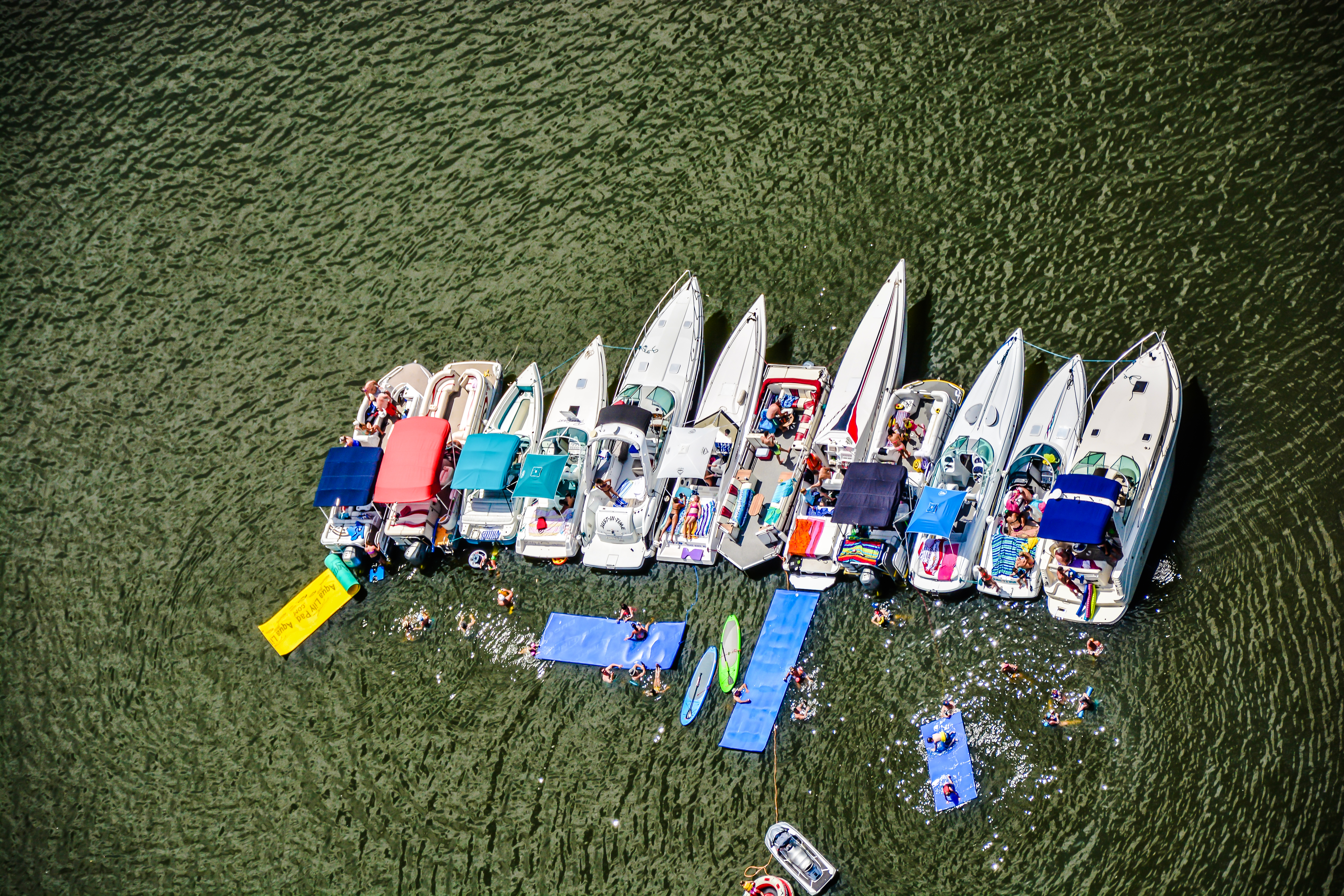 There’s no “right way” to party by boat at Lake of the Ozarks, other than to always designate a sober captain. The not-so-secret ingredient to a righteous party and day of hopping is all about location.

The days of Party Cove are all but dead, but cove partying is alive and well.  The epicenters have split into two main swells branching off the main channel at two confluences 13 miles apart – the Gravois and Glaize arms. Here’s how to spend a party-day on each.

The Gravois Arm, dubbed by dock owners as the “Coconut Freeway” is the hottest run north of the Toll Bridge. 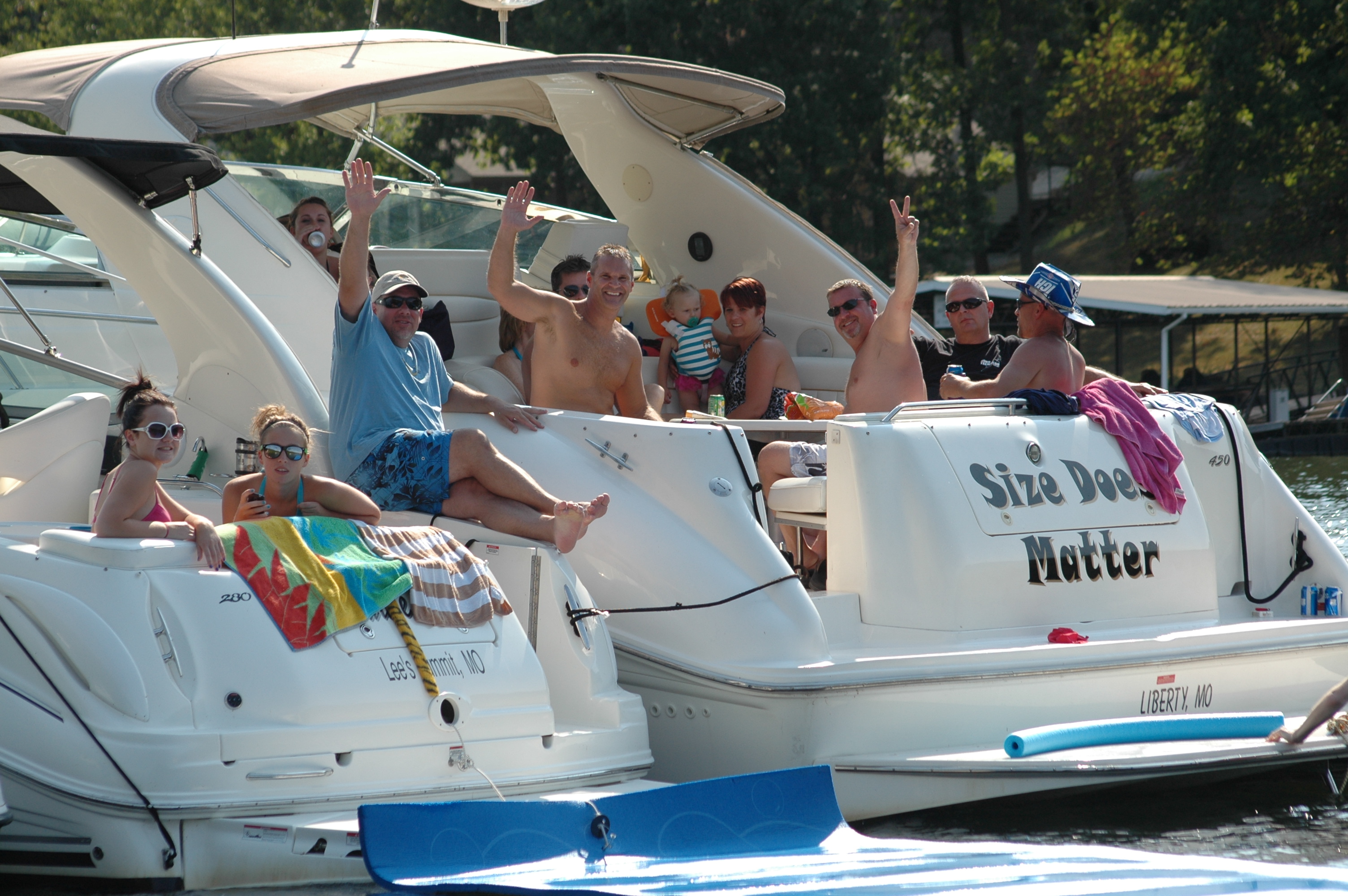 It’s the cove-out spot of choice on Saturday afternoons. A hot spot for more than a decade, it started as OPPC (Old People’s Party Cove), but now attracts non-nude youthful antics amidst family fun. Hit the tire swing launch into the Lake on the starboard side. 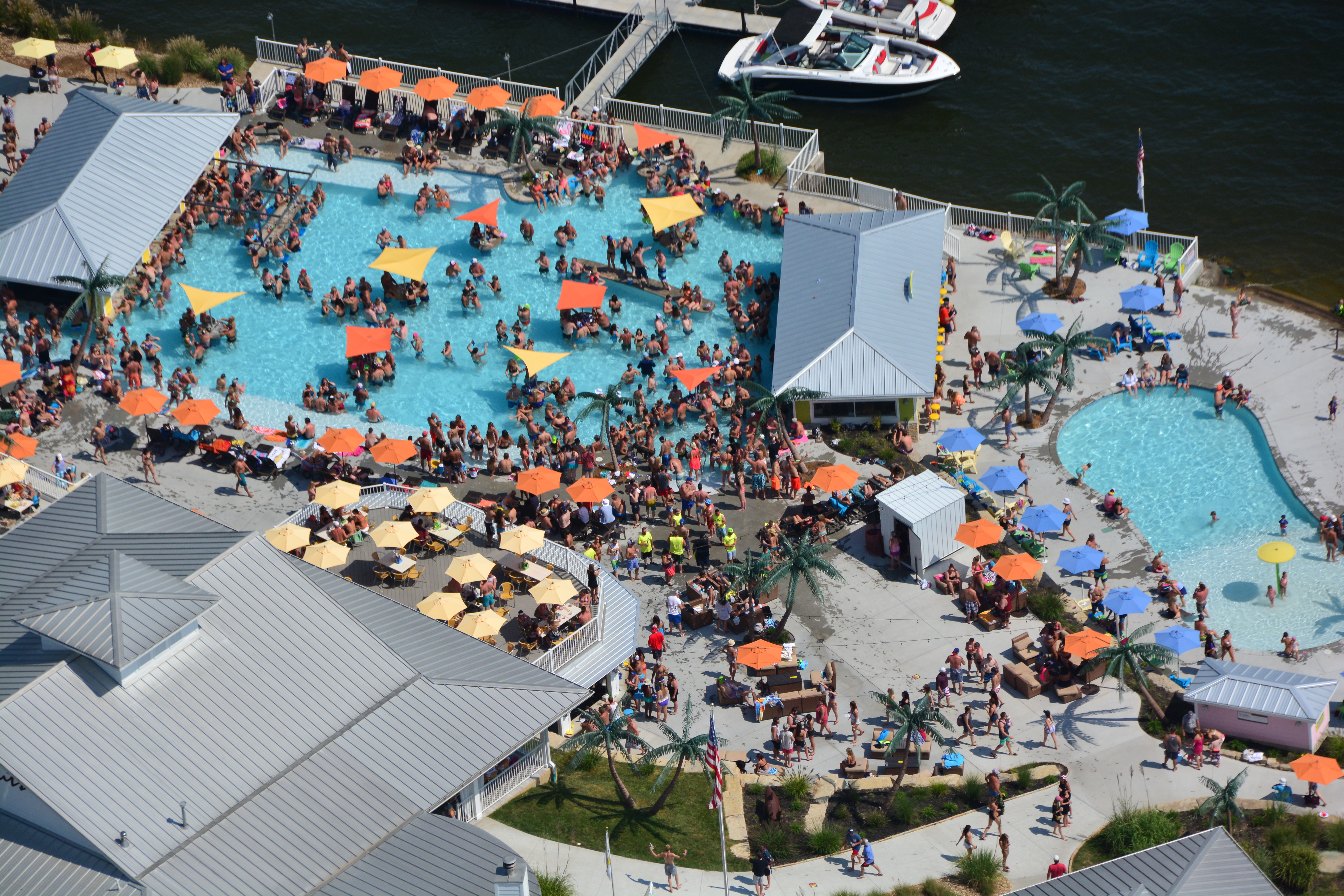 The pioneer of the mega pool-bar party at more than a decade ago at Lake of the Ozarks. Dock before noon on Saturdays, slips fill early. Frozen drinks are legendary. DJ runs the party. 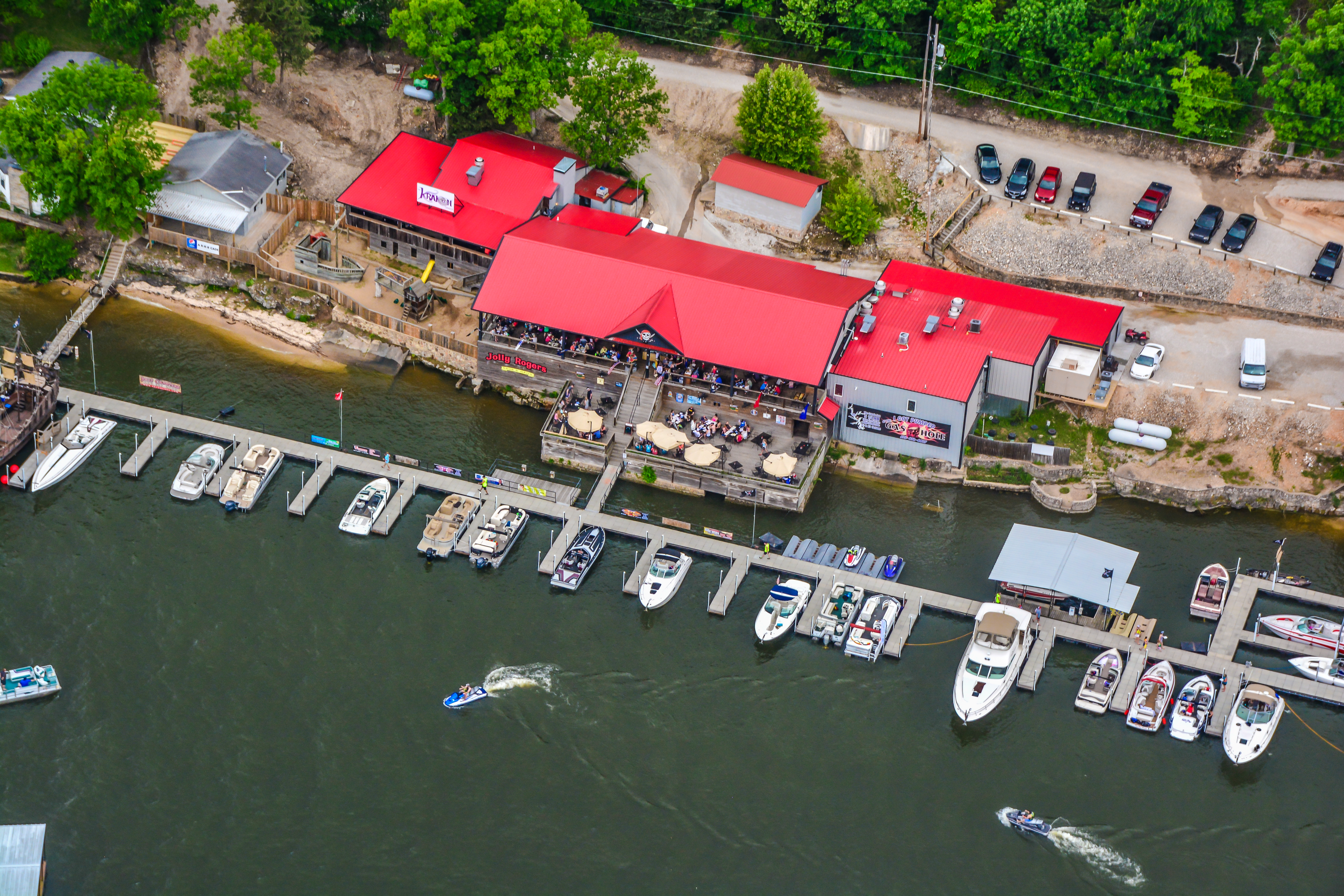 The must-stop, open-air restaurant and boat bar boasts bartenders that rival the best around. The food is scratch superb and dock dudes go above and beyond saving captains from “the wind.”

Stick around for early-evening Live Music. 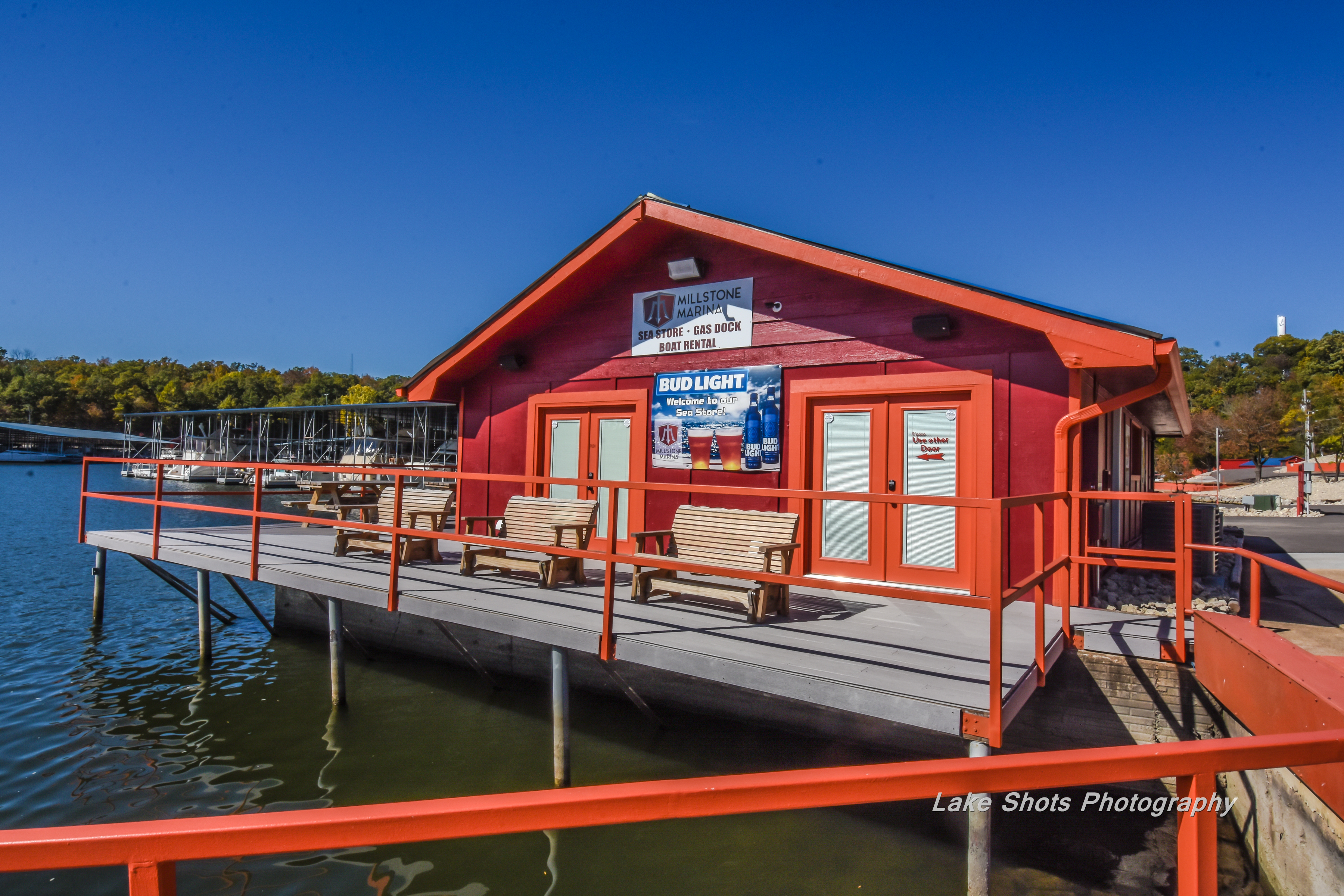 History Made Modern. The revived marina is THE Destination for boat provisions. The Super “Sea” Store has all the party-boating staples: Quick food, ice, beer and booze. You’ll even find Advil. There are many good marina c-stores, but Millstone has the closest to a supermarket you’ll find by boat. 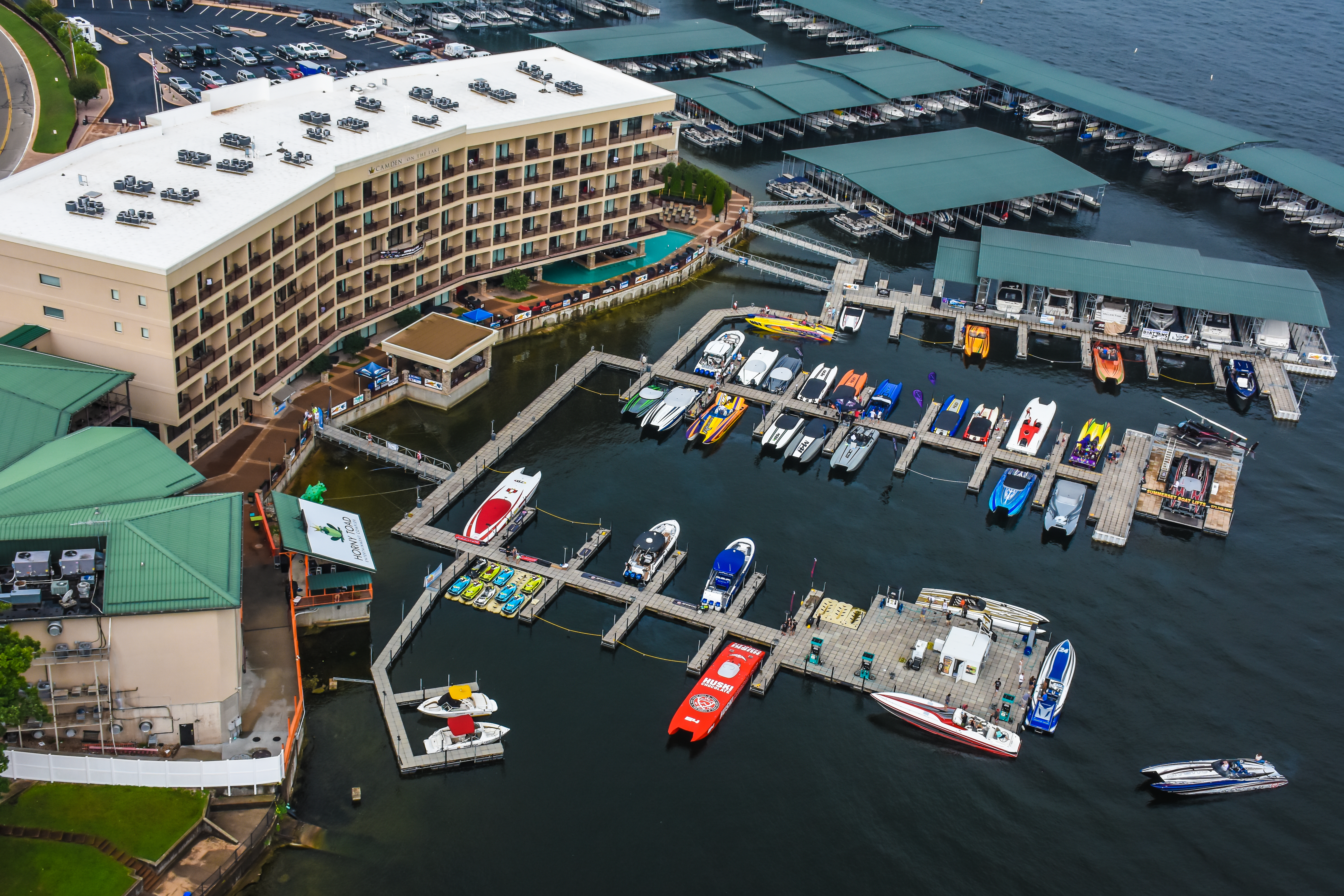 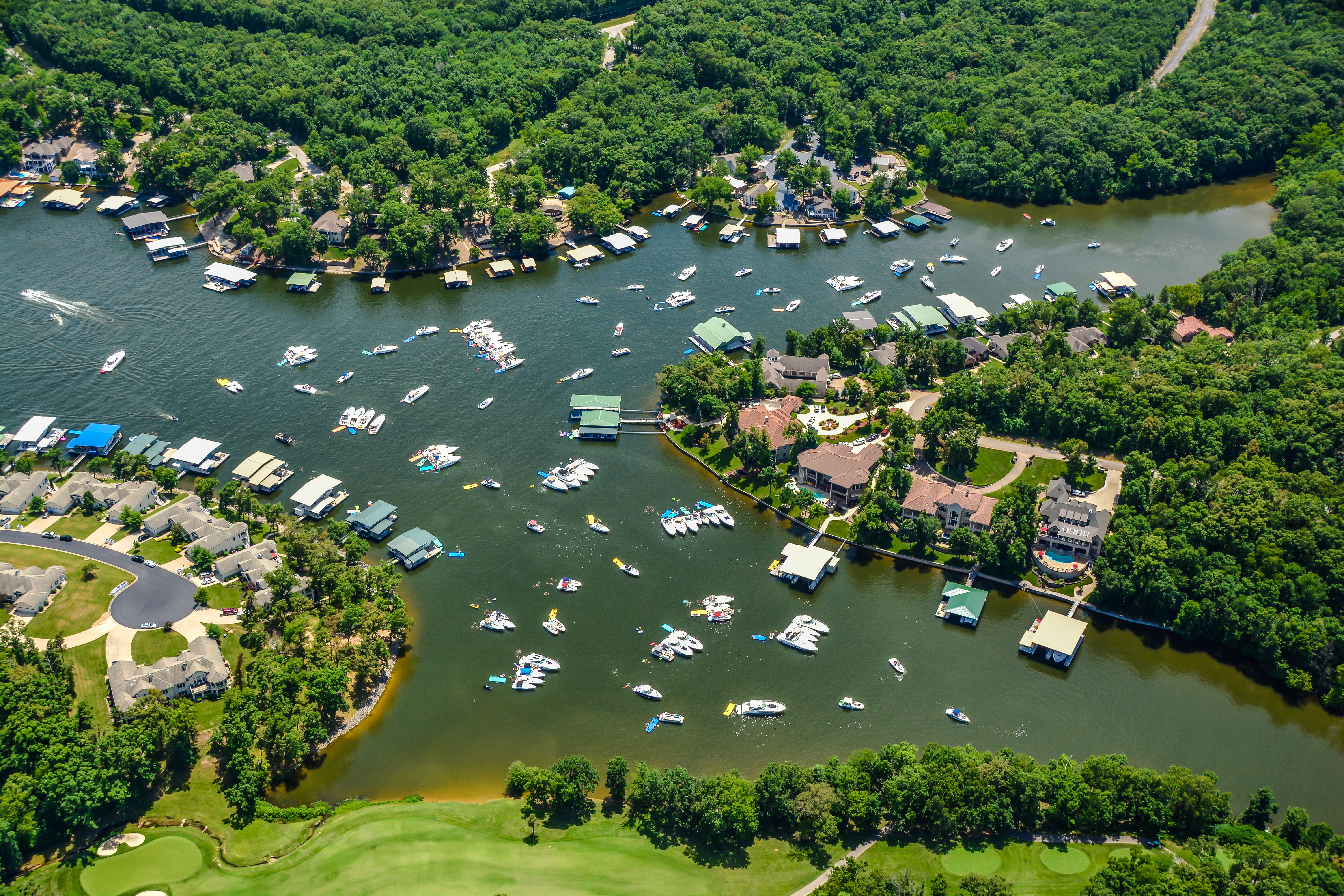 It started as an upscale cruiser spot, but has swelled to rival any cove party at the Lake in a key location, only a few miles from a triad of the most popular pool bars — Backwater Jacks, Dog Days and Redhead Yacht Club. 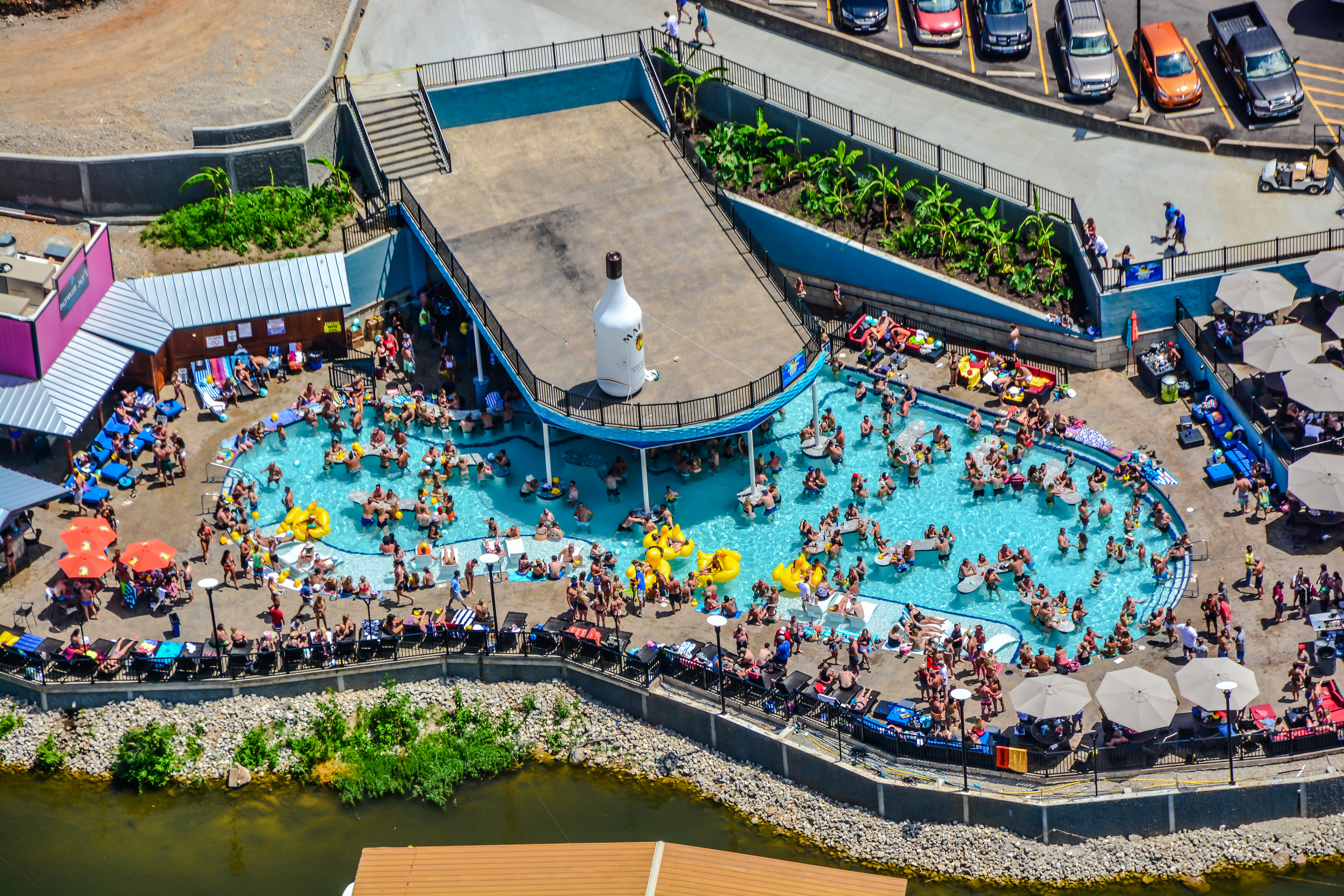 A lakefront staple for two decades, Backwater Jack’s uniquely combines the styles and ingredients of the South Florida and Caribbean cultures with traditional favorites of the Midwest. Newly remodeled with a large pool bar, Backwater has turned up the party vibe with live music from regional and local bands mixed with a great menu for sushi, oysters and more traditional grub. 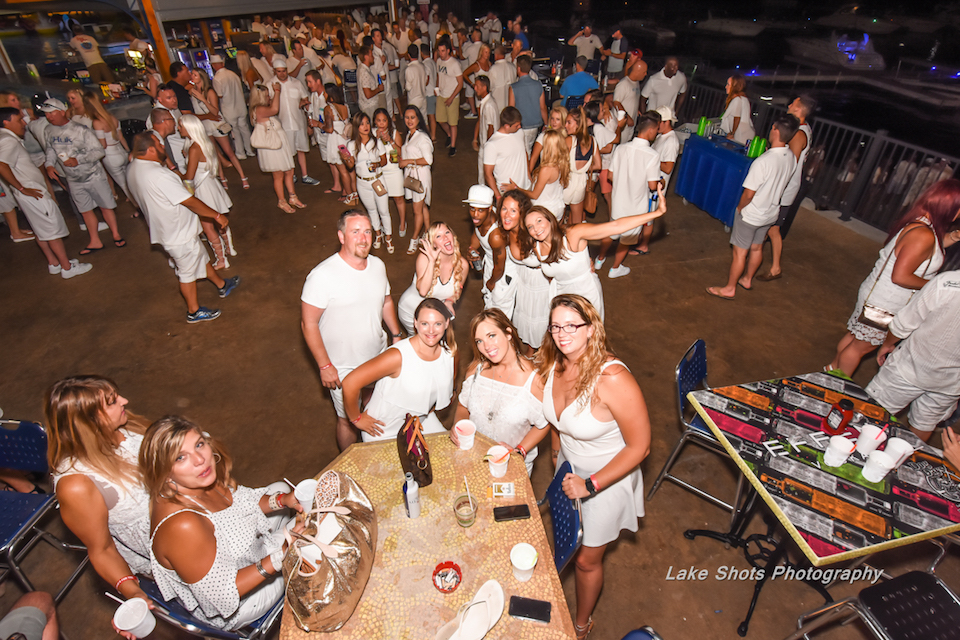 The host the most grandiose boat party of the year Aquapalooza, the Spring In-Water Boat Show, the White Party, and Canine Cannonball, The Dog knows how to throw an event right. A new pool bar only three seasons young, the party kicks it next level and the food has undergone a major upgrade. 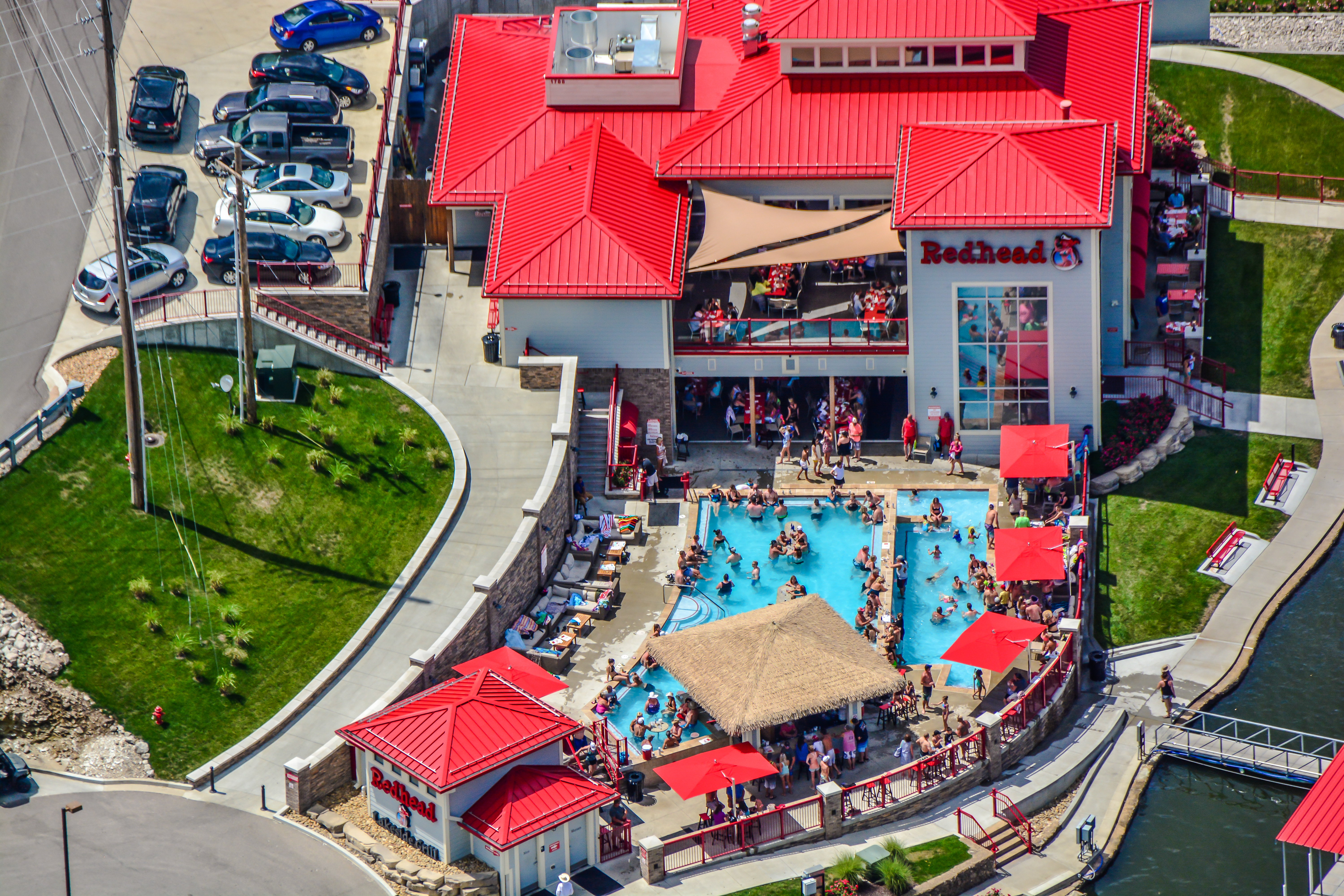 The ultimate complement to the powerboat crowd relying on the Performance Boat Center for fun on the water, Redhead Yacht Club impeccably nets imbibing and culinary delight in a relaxed, upscale way. While inviting to all boaters, Redhead is the clear poolside, waterfront hangout of the “go-fast” crowd at Lake of the Ozarks. 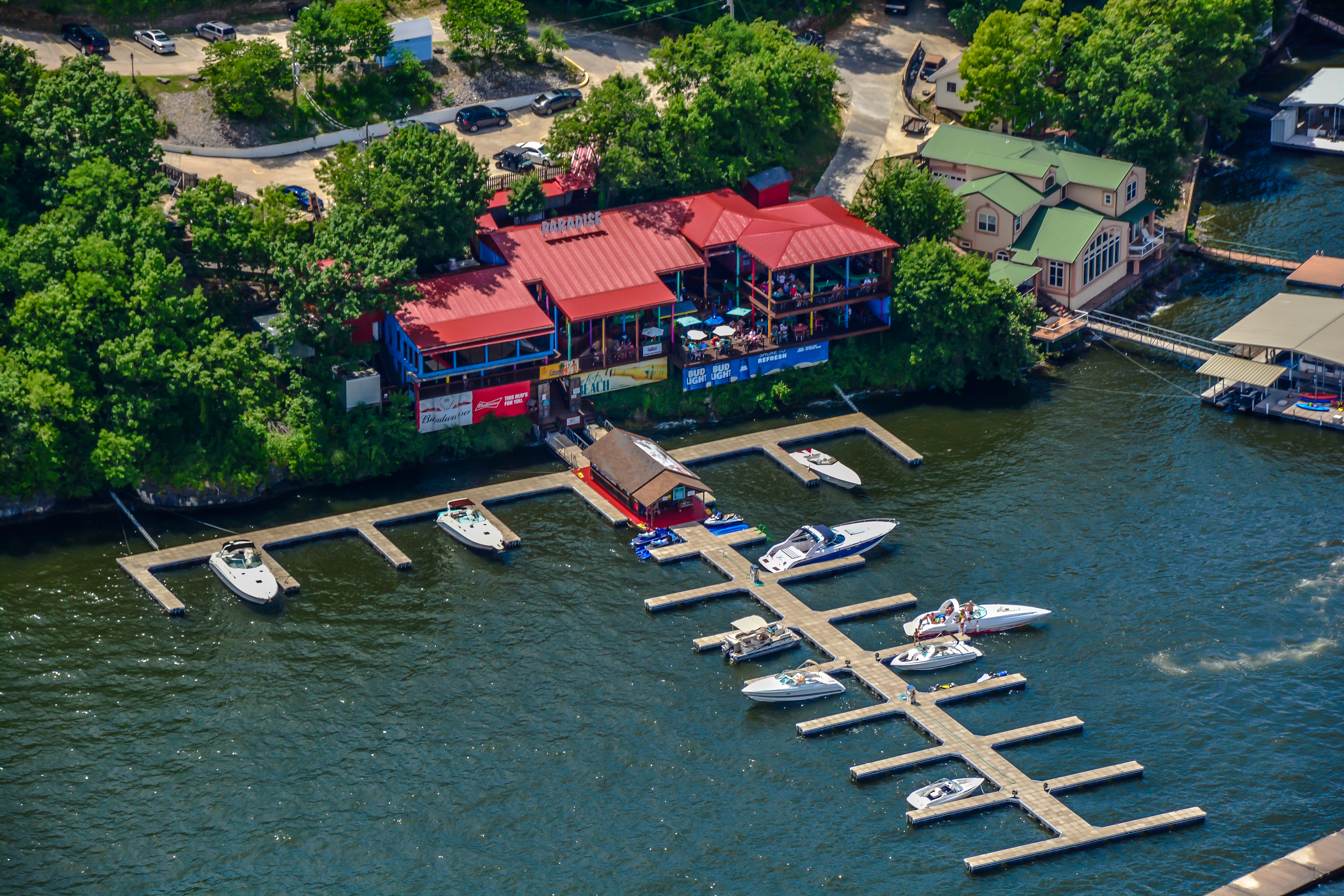 Looking for a lakefront spot to dock and watch the big game? Paradise’s lakefront sports bar expansion on the top deck is the optimal destination. Long known as a family favorite for lunch and dinner, Paradise has been dubbed by SHORE Magazine to serve The Best Frozen Rum Runner at the Lake – it’s hand-blended and perfect every time (the way it should be). 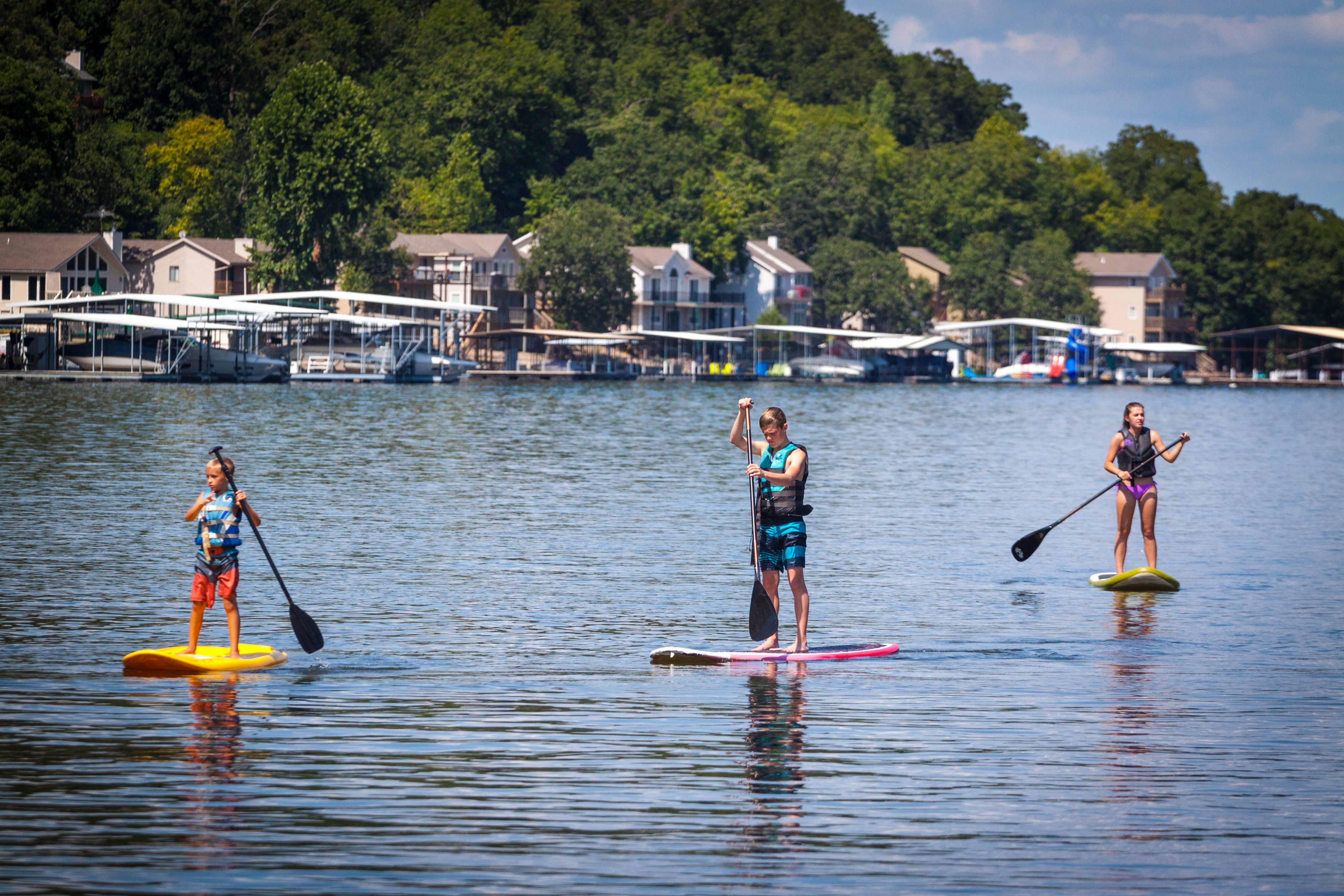 The Four Corners is the last truly rough water at Lake of the Ozarks by most measures. Below the 31MM boaters find a different Lake. Sure, there are still cruisers that plow, but below the Four Corners boats get smaller and shoreline becomes less dense with homes and more lush with beauty. While the Lake is family friendly almost everywhere, below the Four Corners nature and waterfront venues cater to kids and the active family particularly well.