Boating Rules: A Crash Course For Avoiding A Crash

Driving a boat feels like freedom. But that doesn’t mean there are no rules; here are five tips boaters would do well to remember. 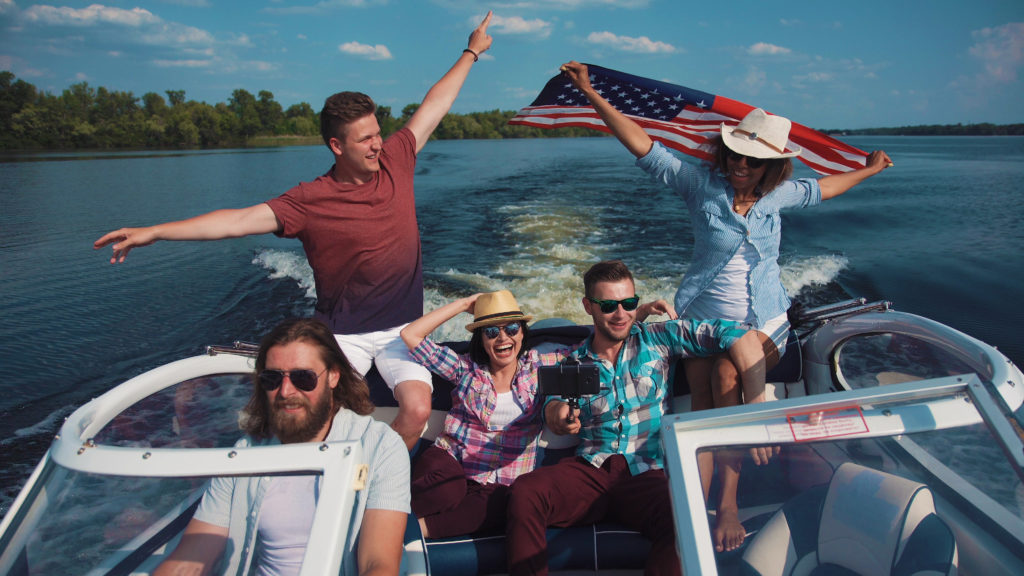 It’s obvious. It’s so obvious, and the message gets beaten into our heads through every medium so often, it’s impossible to forget it. So at this point, there’s no excuse. Sure, back in the “good old days,” every boat driver had a beer can in the hand he wasn’t steering with. But times have changed, and failing to appoint a sober captain can be catastrophic. Maybe you get pulled over and fined (or jailed) for BWI. Or, worse, buzzy boating can cause a collision. Too many boating incidents at the Lake occur because of intoxicated captains.

When Two Boats Meet: What To Do 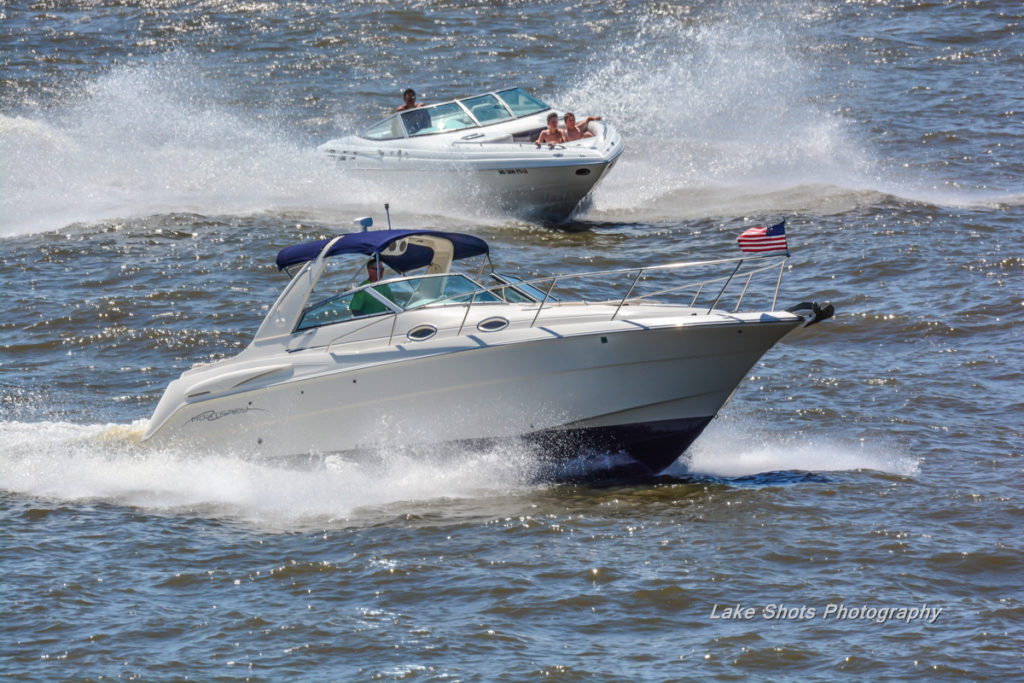 A common question among boaters is, when two boats meet and their courses overlap, which one should keep its course (“stand on”) and which should alter its course (“give way”)?

The answer is found in COLREG (Convention on the International Regulations for Preventing Collisions at Sea), specifically Rule 18. It outlines a pecking order for boats:

(Note, COLREG defines “underway” as a vessel not at anchor, or made fast to the shore, or aground.)

1. A power-driven vessel underway shall keep out of the way of:

-A vessel engaged in fishing

2. A sailing vessel shall keep out of the way of:

-A vessel engaged in fishing

3. A vessel engaged in fishing when underway shall, so far as possible, keep out of the way of:

Those are the rules based on boat type and current disposition. And it’s worth noting that COLREG doesn’t draw any distinction between different types of power-driven boats. A PWC is on the same playing field as a pontoon, a cabin cruiser, or a catamaran, as long as they’re powered by a motor.

But what about two boats that are on a collision course? Here’s what COLREG prescribes:

1. Head-on situation (Rule 14) — when two power-driven boats are on a head-on collision course, both should alter their course to starboard (right)

2. Crossing situation (Rule 15) — when two power-driven boats are on crossing courses, then the boat which has the other to the starboard side must keep out of the way and try to avoid crossing in front of the other boat. In other words, the boat on the left-hand side is the give-way boat, and should turn to the right and cross well behind the other boat. 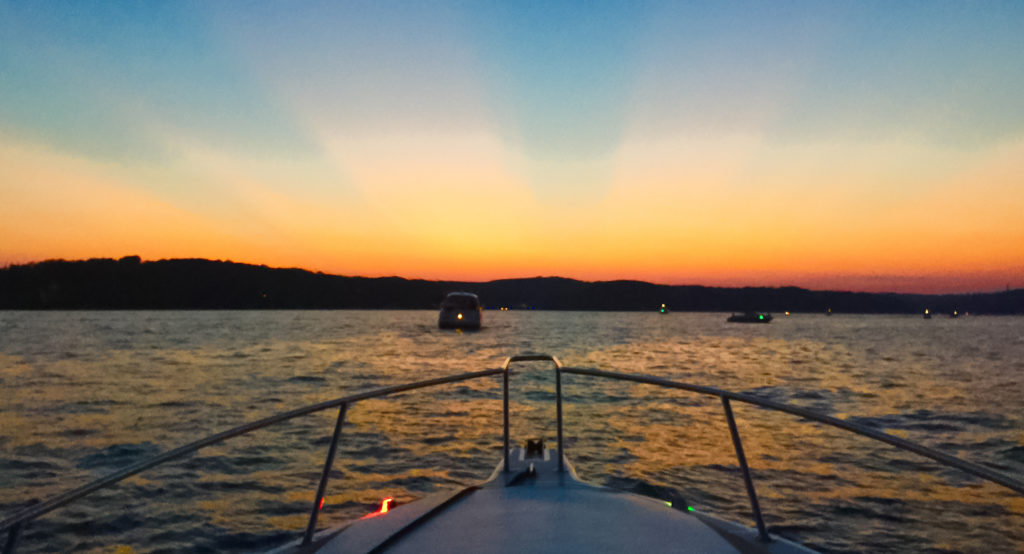 Planning on being on the water after dark? Make sure your navigation lights are working before you shove off. Troopers on Lake of the Ozarks regularly stop vessels failing to properly display navigation lights; on a summer weekend at the Lake, the Water Patrol will issue upwards of a dozen warnings or citations related to boat lights.

-Display a red light on the port (left) side of the vessel and a green light displayed on the starboard (right) side. The red and green lights should be visible from at least one mile away on a dark, clear night.

-Display an all-around white light, which must be visible from at least two miles on a dark, clear night.

Remember: Missouri has a 30 mph nighttime speed limit, effective 30 minutes after sunset to one hour before sunrise. Depending on visibility, it may be prudent for boaters to travel much slower than the 30 mph speed limit at night.

Get Off The Gunwale 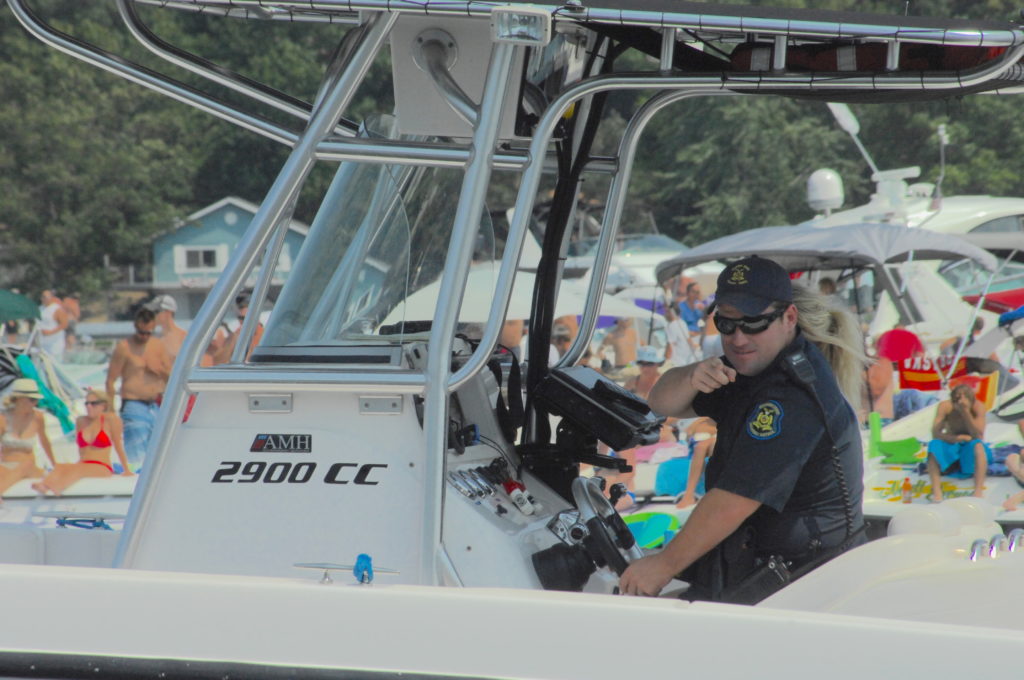 The gunwale is the top edge of the side of the boat, and with that flat, textured surface it can be tempting to sit on.

Resist the urge, and keep off the gunwale until the boat has stopped.

No Tunnel Vision! Boating In The Bubble 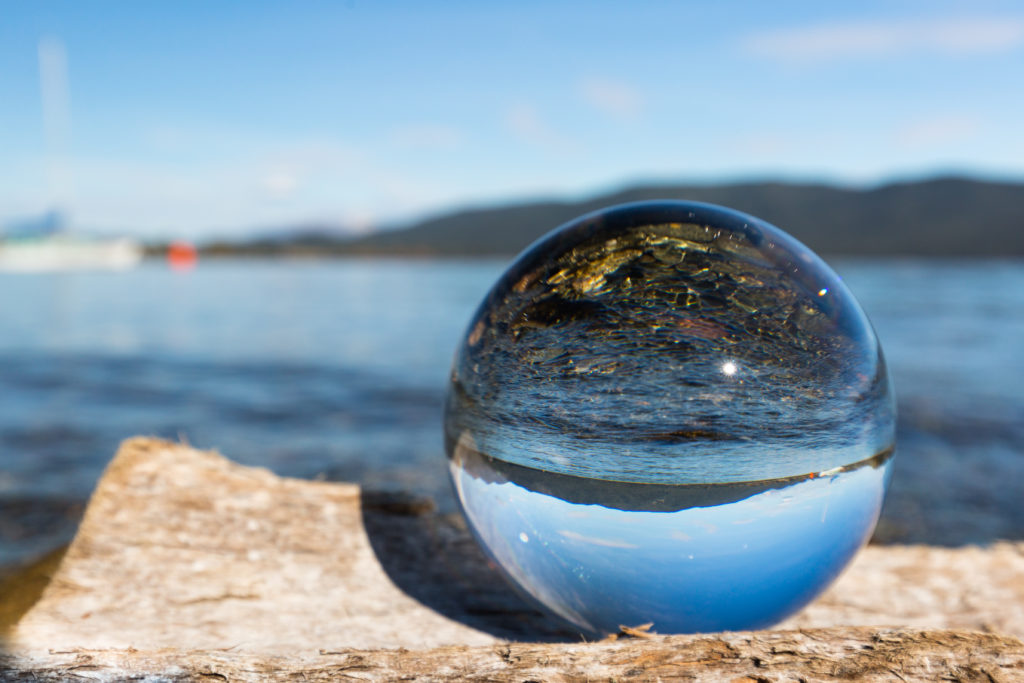 Boaters who only look at what’s ahead are aiming for disaster. Instead, captains (and passengers) should think of their surroundings as more of a “bubble.”

Look Around. Traffic can come from nearly anywhere: overtaking from the stern, crossing from port and starboard, dead ahead. There is no substitute for a constant visual scan all around the boat.

What Lies Beneath? A boat is not operating on a flat surface map. The environment under the keel is critical. The average depth gauge may not give an accurate reading of the water under the keel, and a boat may not even be equipped with a depth gauge. Learning to read the Lake can help. The main channel is reasonably safe, but in the upper reaches of the Lake, even where the channel may be deep, there are trees under water that can create havoc with the drive unit. Look for buoys to mark underwater hazards. And at Lake of the Ozarks, boaters should be especially careful on the Niangua, Gravois and Grand Glaize Arms, as well as in the backs of creeks and coves and in the upper parts of the Lake, where the channel narrows and there are more chances to hit something beneath the surface.

A gravel bar leading from a point of land is a different situation, and the back of a cove will always be shallow water. Both require caution. Running aground at idle speed is not only embarrassing, it will also damage props and lower ends. Grounding at higher speeds may result in people being thrown down on the deck or out of the boat.

Look Up! The last place a boater must look is up. Even though the sky and clouds are lovely on the lake and significant parts of the boater’s pleasure, they can’t be taken for granted. Knowing the weather forecast and being vigilant about changing weather conditions are critical. It can mean the difference between a pleasant day on the water or a dangerous and miserable run back to home port.