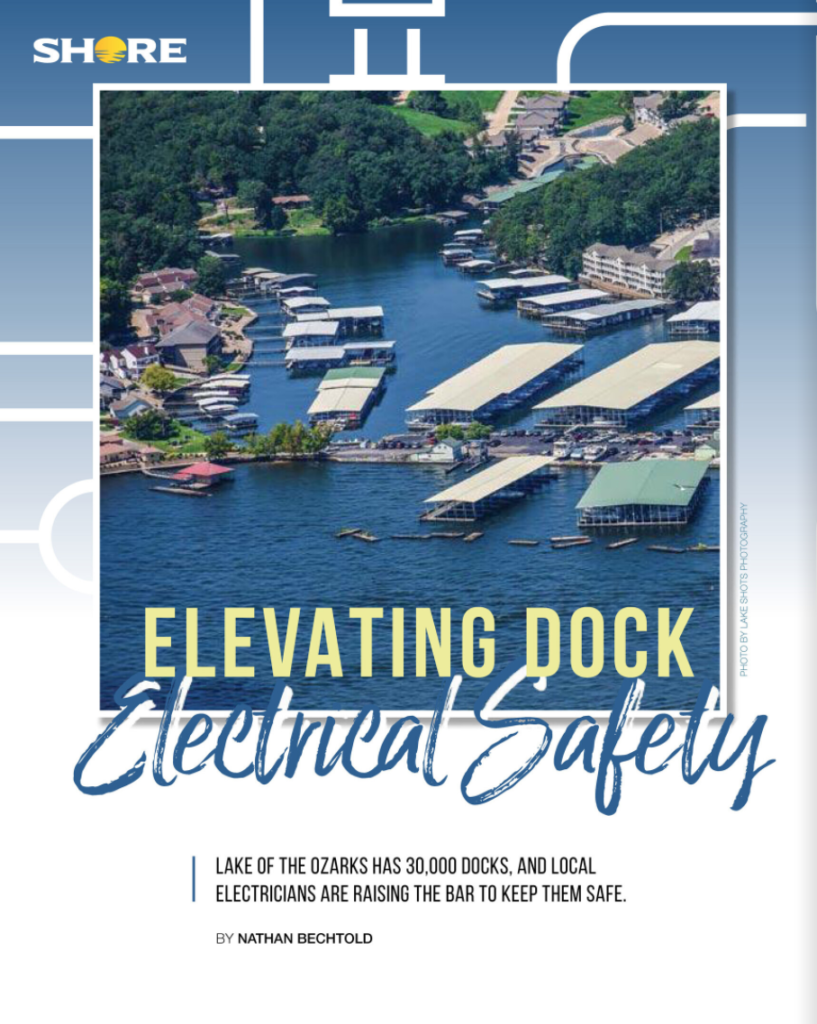 Lake of the Ozarks has 30,000 docks, and local electricians are raising the bar to keep them safe.

A group of electrical contractors at Lake of the Ozarks is banding together to improve dock electric safety.

Decades ago, most docks had no need of electricity, except maybe to power a light. But as technology and the boating lifestyle expand, it’s now common to see docks with wetbars, refrigerators, TVs, sound systems, and custom lighting, all of which need an electrical connection. With an estimated 30,000+ docks on Lake of the Ozarks, there’s plenty of business for experts in dock repair, boat lifts, and dock electric.

Plenty of electricians want to do the job right. They follow codes strictly, and err on the side of caution. But Seth Agnew, co-owner of Catalyst Electric at Lake of the Ozarks, says his company too often sees evidence of shoddy dock electrical work, often when they’re called out to fix what the last contractor did wrong.

Catalyst employees have found electrical installs where the ground wire from the dock was never connected to the service ground at the house: the previous contractor had just shoved the ground wire a few feet into the conduit, so it would pass a visual inspection. That kind of negligence can be deadly; a dock with inadequate grounding can leach electricity into the surrounding water, which can be fatal for swimmers.

Agnew says he’s also seen a 240-volt system feeding a dock, but installed with only three wires. That means there was no ground wire serving the dock at all. “Just because [a homeowner sees] a green wire coming from the dock doesn’t mean it’s grounded!” he said.

Catalyst electricians have found improper junction boxes, nicked wires, dock electric tied to other circuits in the house, junction boxes beneath dock decking (a major no-no), and dock lights that stay on even when the shoreline power is cut off—which means some of the dock’s wiring bypasses the shoreline cutoff. They often find submersible pumps in the water: which is not permitted by Ameren and is extremely dangerous, since that means there is likely a bare wire somewhere in the water. “Some people just don’t know,” Agnew said.

In one situation that could have been fatal, Catalyst was called to a lakefront home the morning of July 4, 2014, where swimmers reported feeling electricity in the water. The culprit was 100 yards away: a ramp whose dock had been relocated. The main feeder wire for the dock had been disconnected when the dock was removed, and the wire was simply wrapped around the ramp railing.

Missouri has no state licensing for electricians, and no private-sector solution existed to help dock owners know whether the electrician they were hiring was educated, trustworthy, and wouldn’t leave them at risk. So local electricians created one.

Lake Of The Ozarks Association of Electrical Contractors was founded by three local electric companies—Catalyst Electric, Integrity Electric, and City Electric—who saw a need. The coalition has a rotating board, representing different local electric contractors. The group is creating a training curriculum and set of standards with the help of Ameren electricians. The goal is to help distinguish the trustworthy electric companies, so home and dock owners can make an informed and good decision. Electricians who want to join the coalition sign a pledge to adhere to code-compliant work and always obtain permits where required. Once the training curriculum is complete, members will go through it to become LOZAEC certified.

Agnew said contractors who are part of LOZAEC want Lake homeowners to see, “Here’s a list of companies who actually want to help keep my family safe on the Lake.”

Heather Dissen, who owns Dissen Electric along with her husband Roger, said they were thrilled to hear about the development, and were eager to be the first to join.

Ameren personnel have vocally supported the coalition, pointing to Lake of the Ozarks as on the leading edge of dock electric safety. Some day, membership in the coalition could be the gatekeeper for electrical contractors to get work at the Lake.

The group has accountability, too: any member who cuts corners or violates the rules will lose their membership. The full list of members and more information can be found at the coalition’s website: www.lozaec.org.