Fishing 12 Months A Year On The Lake There’s no off-season for fishermen here.

From January through December, something’s always biting on Lake of the Ozarks. The only reason not to wet a line is if there’s too much lightning, too much ice, or too much work!

That’s what I’ve found in my 40 years of fishing the big lake –and writing stories on my trips for The Kansas City Star. So here are some ideas for year-round angling: what to fish for, and what to throw.

He fishes the Warsaw area of the big lake in winter, setting up within casting distance of deep channel holes where the blue cats spend the cold months. Then he will put out medium-action rods with 80-pound braided line and 10-ought hooks baited with fresh shad.

For those who would rather be sitting in a bass boat than in front of a fire, February can be a good month.

I remember a trip I took with guide Jack Uxa in 2018. There was snow on the ground, and Uxa had to weave his boat through patches of ice to get to the point he wanted to work.

But we caught bass. Fishing in the North Shore area, we caught and released 10 largemouths by dragging plastic crawdad imitations and Ned rigs along the bottom. The key? Using a slow-motion retrieve to appeal to the sluggish bass.

Dreaming of catching the biggest fish in the Lake? March is your month.

When the paddlefish-snagging season opens March 15, hundreds of fishermen flock to Lake of the Ozarks to chase monstrous fish.

They drag heavy weights and big hooks through the water in hopes of landing a paddlefish that can grow to sizes of 100 pounds or more.

The deep holes on the upper 40 miles of the Osage River arm offer the best opportunities. Early in the season, the Ivy Bend-Coffman Bend area is a hot spot.

April is the greatest month of the year for the casual fisherman at Lake of the Ozarks.

When the crappies move shallow to spawn, people who fish only a couple times a year make sure they get out. It doesn’t take a high-dollar boat, high-tech electronics or the latest in rods and reels. I’ve seen fishermen of all ages and from all walks of life fill their stringers while fishing from the bank with old equipment and a bucket of minnows.

Look for the crappies along gravel banks and in shallow brush piles in coves. Use anything from minnows to plastic jigs, and you’ll catch fish for the frying pan.

As long as I live, I will replay memories of bass fishing trips in late April and early May at Lake of the Ozarks.

I can picture accompanying guides to the back of coves, and being able to spot a bottom filled with circular areas where the bass have fanned out nests. Large bass roamed those areas, staying close to their chosen nesting spots, but not yet locked on them.

Many times, we would cast out a Senko-type bait—a straight-tail plastic worm — and let it drift down on the nest in an erratic fashion. We could watch the bass assigned to guard that nest dart up and inhale that bait, then flash through the water once it was hooked.

Look for clear water, gravel flats in the back of coves, and water temperatures in the mid to upper 60s. 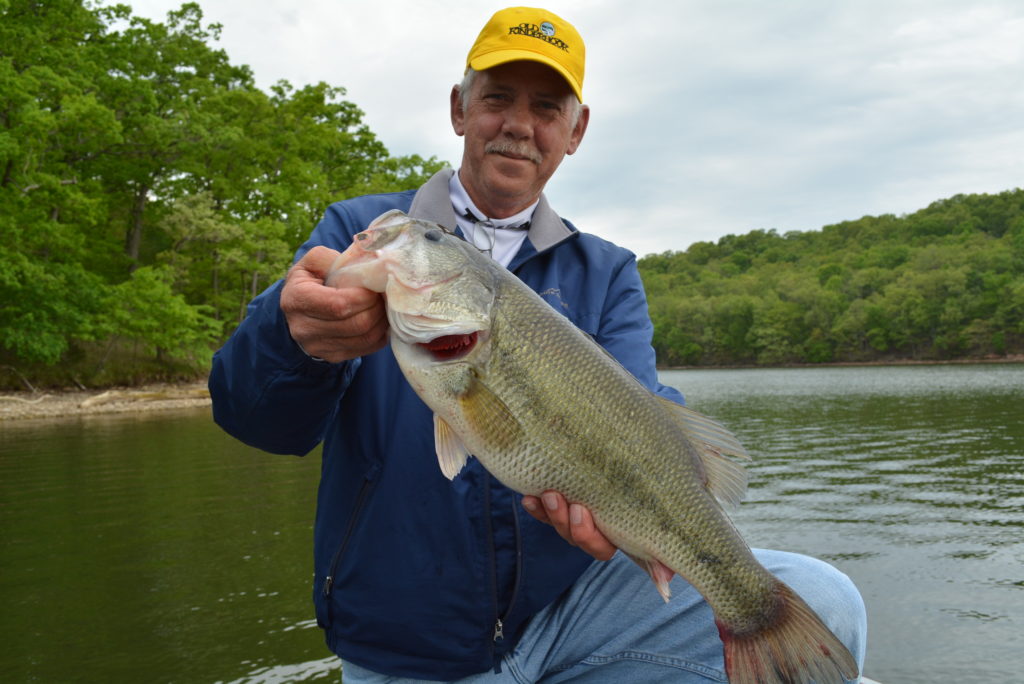 Before the weather gets too hot, June can be a good time to catch bass.

After the largemouths recover from the spawn, they often move out to points and actively feed. Especially in the first part of the month, you can catch and release a lot of keeper-sized bass (15 inches and longer).

Baits such as jig and pig, swimbaits, topwater lures and crankbaits will all work.