The Legend Of The Lake’s Phantom Steeple 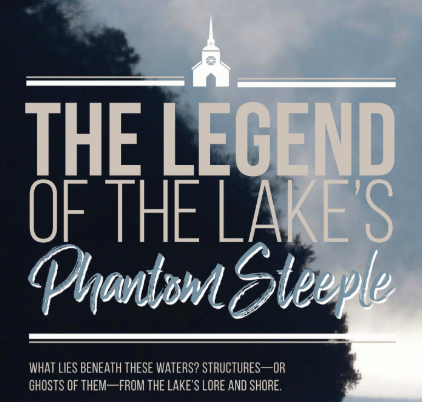 What lies beneath these waters? Structures—or ghosts of them—from the Lake’s lore and shore.

There is an air of mystery when the subject turns to what is under the waters of the Lake of the Ozarks. After 85 years there are few folks around who clearly can remember what the Osage River valley looked like before it was inundated by the Lake. And although a few old maps turn up from time to time, most of them provide little detail.

One of the more frequent stories that bear witness to this mystique is the sighting of a certain church steeple that can be seen just under the waves when the Lake is low.

Like any genuine mystery, this one is a little vague. When pressed for details about it, the typical boathouse conversation goes like this:

“Well, under the Lake. You can see it when the Lake’s down.”

“But where exactly is it?”

“Gosh, I can’t remember. But everybody knows about it.”

John, in his turn, would refer the inquiry to Dave, or Chris, or Holly. Along the way, someone would add the interesting fact that not only is the steeple visible at times, but on quiet nights one can hear its bell softly ringing. And while many seem to know about this mysterious steeple and its bell, few have firsthand knowledge of its exact whereabouts. Once a gentleman came forth who flatly stated in the presence of this writer that the church steeple is in Linn Creek Cove, where he has seen it in low water seasons, and where it dwells still, awaiting another droughty year to rise to within a few feet of the surface and boldly sound its bell.

This is an amazing revelation, and one that greatly adds to the lore of the Lake. Imagine, a whole church down there under the waves, with its steeple eerily reaching upward through schooling fish and intermittent layers of green- and yellow-filtered light.

Unfortunately, there are problems with this romantic vision.