Big things are under construction at the Lake: projects that promise to grow and reshape the Lake economy for good. 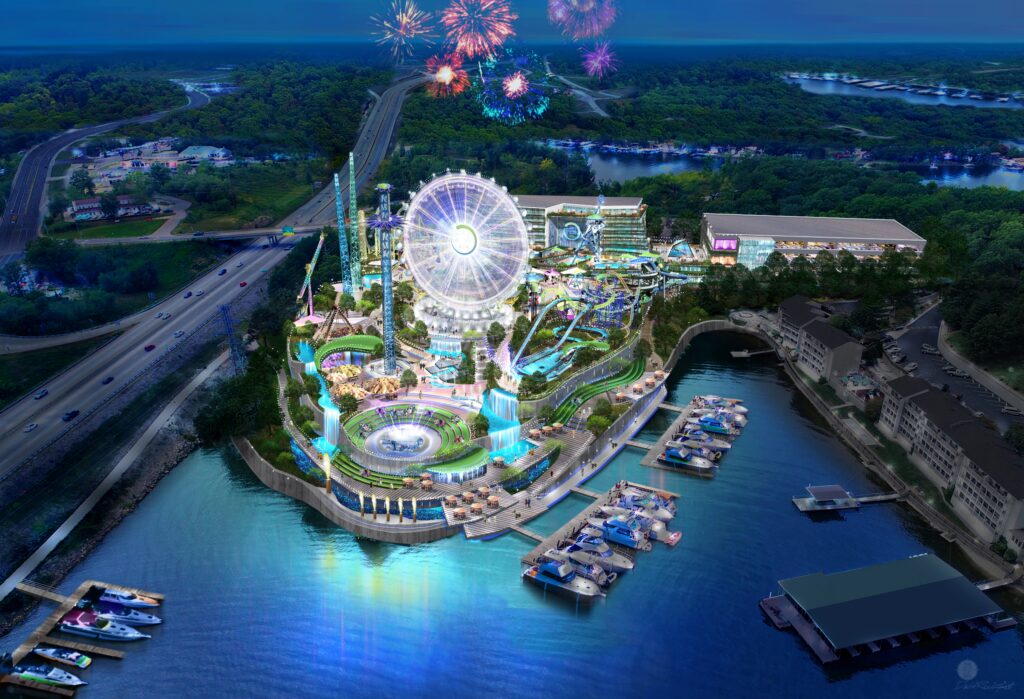 The Lake of the Ozarks has long struggled under the “seasonal economy” stigma. And no doubt, the Lake’s population swings dramatically throughout the year: millions in the summer, and about 100,000 in the dead of winter (per an estimate by the Lake of the Ozarks Regional Economic Development Council). But developers at the Lake see a future for the region that’s bigger than a few months of summer fun. They see a year-round place to live, love, and play, and the past year’s cascade of announcements revealed these aren’t pie-in-the-sky dreams: these developers mean business. And that’s a promising sign for the Lake’s economy downstream.

News of ‘The Oasis at Lakeport’ took the Lake by storm in late-2022. The family resort and entertainment destination being developed by Big Thunder Marine will feature year-round entertainment, offering 20 acres of amusement rides and attractions, along with hotels, restaurants, amphitheater, marina and boardwalk. Amusement offerings will include roller coasters, thrill and family rides and a 200-foot-tall observation wheel.

Fred Ross, owner of Big Thunder Marine and the Lakeport property, saw immense potential in the location since he first embarked upon the four-year endeavor of its acquisition. “Our pursuit of this property was propelled by an unwavering vision of its eventual development into an iconic family focused entertainment epicenter, and a tremendous asset to the Lake of the Ozarks. I couldn’t be more thrilled to partner with SkyView and Tegethoff to execute upon this vision, and witness its manifestation into what will soon contribute endless memories to visiting families, and immense commerce to the Ozark community.”

SkyView Partners and Tegethoff Development say the 2023 groundbreaking will lead to an opening in summer 2024. The entertainment district will be located at the old Lakeport property acquired by Big Thunder Marine in 2021, at Highway 54 and Jeffries Road: visible on the right-hand side of the Grand Glaize Bridge when heading west — directly across the channel from Topsider Condos. 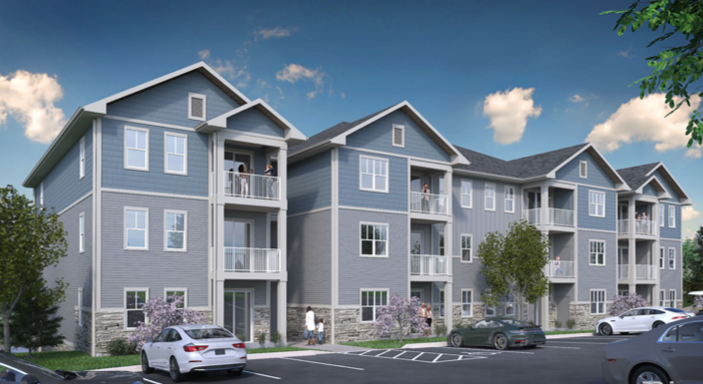 The Preserve at Sycamore Creek

The Preserve at Sycamore Creek

It’s not the most glamorous project at the Lake, but it’s exciting for community leaders and business owners because The Preserve at Sycamore Creek brings a pile of housing into a market that’s desperate for it.

“There was just no housing,” said developer Jeff Tegethoff. “And as I met more people, more of [my wife’s local] work colleagues, and ultimately at the time that CEO of [Lake Regional] Hospital, I started hearing the story that housing was the number-one recruiting hurdle to get people to move full-time to the Lake for the hospital,” Tegethoff said. “I started talking to larger employers down there, and I kept hearing the same thing.”

Building affordable residences for the Lake’s lower-wage residents is tricky: construction costs have risen in recent years, and the Lake’s topography does a number on excavation bids.

So will The Preserve be affordable? It depends on the definition. Section 8 housing this is not, but with 1-bedroom units at this brand-new apartment community starting at $900/mo, that’s affordable for two people working a decent hourly wage who want to share an apartment. In all, The Preserve promises to bring 268 apartments to an inventory-hungry region, and Tegethoff Development expects to spend $63 million to do it. The complex, located on Nichols Rd. in Osage Beach, will include community amenities such as a clubhouse, pool and splashpad, fitness center, dog run and surface level parking. 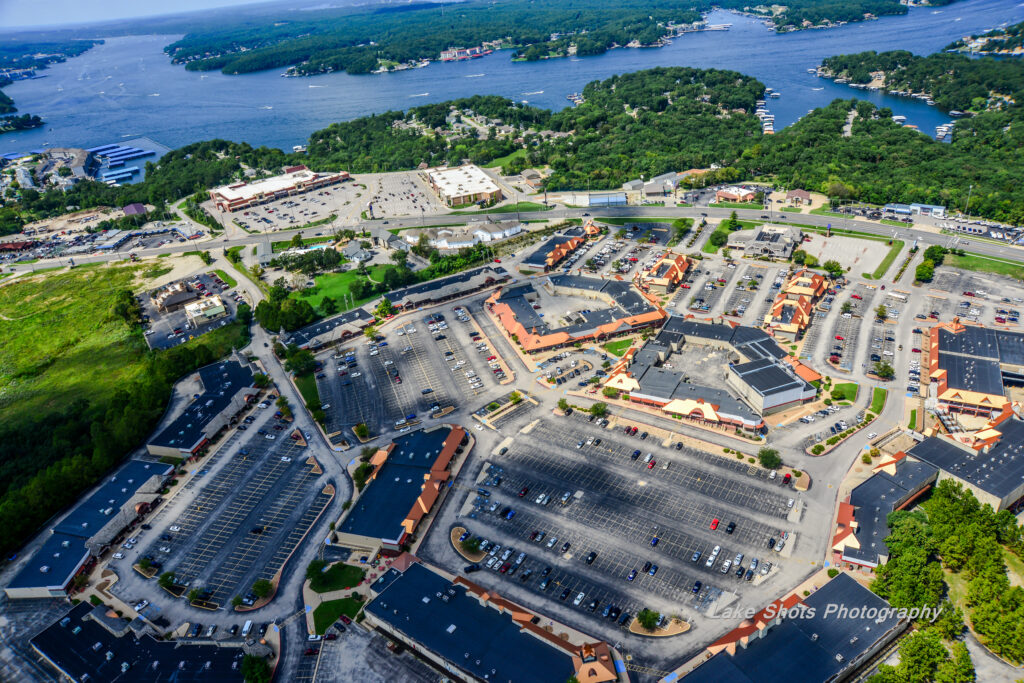 One of the biggest development stories of 2021 and 2022 — the outlet mall under contract with big plans to redevelop it — took a surprising and disappointing turn in the summer of 2022, when developers and the City of Osage Beach failed to come to terms over the project plan.

As of this writing, the fate of the mall — which has fewer than two-dozen stores, down from its heyday of more than 100 — is unclear. But this year is likely to bring some kind of decision on the future of what was once the brightest spot in the Lake’s retail picture. 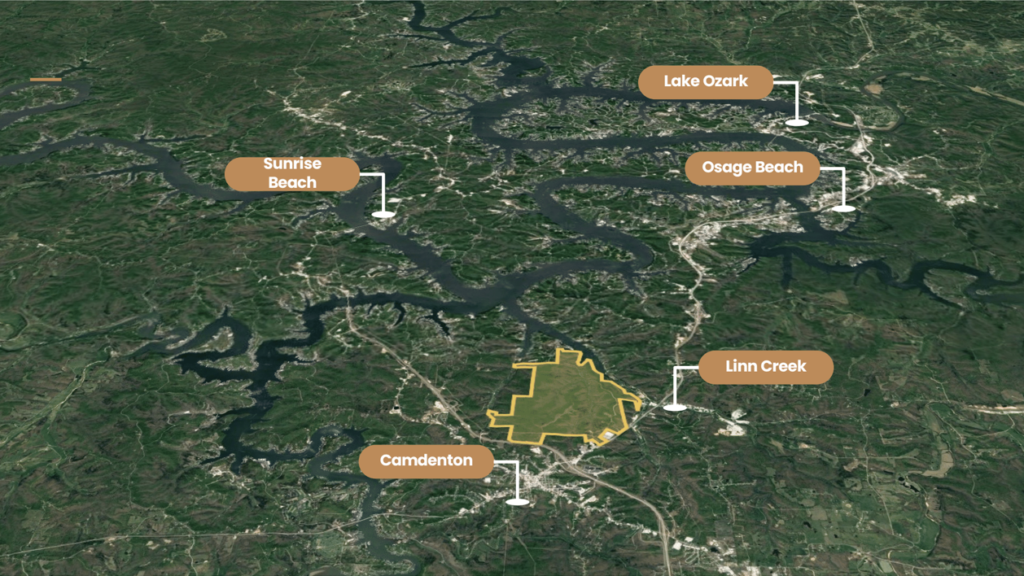 Satellite Image of Lake of the Ozarks

No other single project has encompassed as much land as the enormous, 2,200+ acre development being planned on the shores of Lake of the Ozarks… other than the construction of the Lake itself. The project is the brainchild of Lake native Blake Hodits, who found immense success in the tech world and came back to his home at Lake of the Ozarks, hoping to make an impact. He’s been sparse on sharing details about his MO Lake Development as the project comes together, only calling it an “experiential masterplanned community.”

“It’s a holistic community that’s built to fill the gaps of the community that’s a unique destination and making it a full time place to live,” Hodits said. “What we’re basically putting together is a new community.” He talks about job-training and educational needs, as well as housing priced for first-time homebuyers.

The massive property will undoubtedly take years to develop in the way Hodits’ team envisions it, but 2023 will likely bring more public revelations about what’s in store. “It’s going to be something we can all enjoy,” he promised.

The villa scene has never been much to speak of at the Lake. Though an interesting concept, developers have found villas less appealing than condos and individual lakefront homes. However, in 2023, avid powerboater and accomplished developer Adam Seraphine will be busily working on the Lake’s newest waterfront home and villa community: Harper’s Cōv. Seraphine, a long time Lake-goer, says Harper’s Cōv is as close as anything in his portfolio to what he’d call a “passion project.” It will have 16 lakeshore lots, 21 second-tier lots, and 16 villas, as well as a lakefront pool and golf cart community. The villas are 3-bed, 4-bath with an oversized two-car garage and optional pool. Interested buyers can contact the Krantz Team at Re/Max Lake of the Ozarks. The first phase of villas is expected to open this year.

In the height of the Lake of the Ozarks condo boom — the mid 2000s — there were around 1,500 condo units on the market at any given time. Builders were building and buyers were buying.

The Lake of the Ozarks needs more condo inventory, and several are under construction

Havens at Four Seasons, located in the Village of Four Seasons, is a small, upscale complex with luxury amenities that craft a resort-style experience. With only 39 units, some of which are already sold, availability is limited. Choose from 3 or 4-bedroom plans or one of the eight penthouse suites. Units are available starting at $699,000.

At the high-visibility Topsider Condos, construction on the next of several planned buildings began at the end of 2022. The development will ultimately bring more than 140 condo units onto the market… but they’re nearly all sold already.

And The Reserve at Isla del Sol — the next condo building on the Lake of the Ozarks’ only livable island — is under construction. Offering panoramic views of the main channel, condos at The Reserve will likely be snatched up quickly, too. As average sale prices move up, profit margins may become appealing enough for more developers to jump into the condo space. 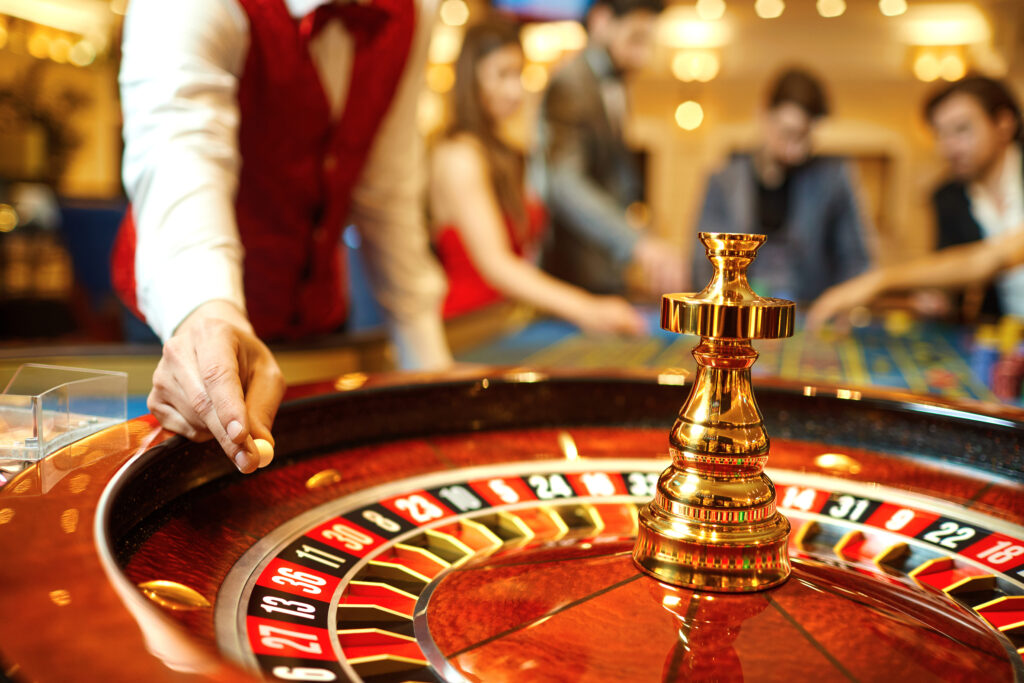 This year won’t bring any grand openings for the two casinos developers hope to bring to Lake of the Ozarks. It probably won’t even bring any groundbreakings. Before moving earth, they have the much more difficult task of moving politicians and maneuvering past bureaucrats.

The Osage Nation is making their way through the U.S. Department of Interior approval process and seeking an agreement with the state of Missouri to operate a casino in Lake Ozark, at the intersection of Bagnell Dam Blvd. and Osage Beach Pkwy.

Meanwhile, Osage River Gaming — a group of 10 investors who have been laboring for years to change Missouri gambling law to allow a casino in the Lake area — will be working to pass legislation. Their hope? Get a proposed constitutional amendment on the 2024 ballot that would permit gambling on the Osage River.

How long until the roulette wheels are spinning and shouts are coming from around craps tables at the Lake? No one really knows, but there’s probably an over/under on it.