Some boaters have known for years what they’ll name their dream boat. For others, their new vessel’s christening is the result of an agonizingly long debate. By any other name, would the ride would still be as sweet?

Each year, Boat Owners Association of The United States (BoatUS) tallies the most popular boat names. The tradition dates back a quarter century, with the list derived from adding up requests for boat name designs from BoatUS Boat Graphics. Each reveals something about the personality of the vessel’s owner. Here’s the most recent list, along with some photos of especially clever boat names spotted around Lake of the Ozarks… 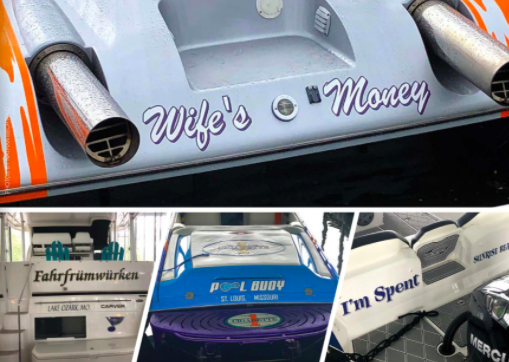 Aquaholic: Can you overdo time spent on the water? This kind of imbibing, at least, won’t give you a hangover – except maybe on a Monday morning when you have to go back to work!

Pearl: Adapted from the fictional ship in the “Pirates of the Caribbean” film series, folks who put Pearl on the transom likely know that their luxurious vessel has an understated luster.

Forever Young: While boating isn’t exactly the Fountain of Youth, many boaters say the feeling of boating, sailing or fishing keeps them feeling young. A perfect name for maintaining a stress-free boating life.

Second Chance: This boat owner has likely had an opportunity for a do-over – be it with boating or a life challenge related to health, career or matrimony. Truth is, we all need one (or more).

More Cowbell: From the absurd and hilarious Saturday Night Live comedy skit featuring Will Farrell and Christopher Walken. Perhaps a boat with this name is a little over-the-top as well?

Pegasus: A winged horse from Greek mythology that was capable of creating water springs just by striking his hoof into the earth. This boat name that connects earth and sky is commonly found on both sailboat and powerboat transoms.

Feelin’ Nauti: Ah yes, the old “nauti” wordplay. Get a cove, you two!

Why Knot?: said this boat buyer when the salesman asked if he wanted additional options.

High Maintenance: This term, sometimes used to reference a spouse, may be an especially good choice for a high-performance boat.